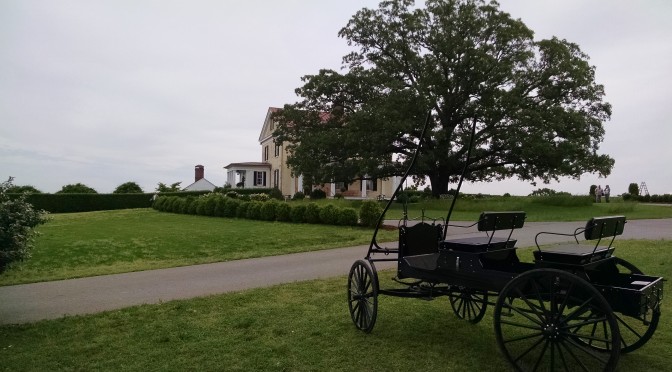 I recently had the distinct pleasure of spending a few days touring Moss Mountain Farm, which is the home of P. Allen Smith, garden and design expert as well as host of the PBS television shows P. Allen Smith’s Garden Home and P. Allen Smith’s Garden to Table. I was honored to have been invited, along with about thirty of the most talented Garden Writers I’ve ever met, to attend Allen’s annual Garden2Blog event.

Before our visit, I was told that each guest would have the opportunity to record a short video in which they answer a gardening question. After a day on site, I was asked what I liked most about Moss Mountain Farm.

Wow, what a great question! Way better than what I had prepared for ahead of time. And really something that I had been thinking about and sharing the details of during my phone calls back home each night. I was completely enthralled by so many aspects of the farm during my short stay at this amazing venue. I think I gave a fairly coherent answer during our sound check, but as we were about to do our live take, a helicopter started circling lazily overhead. While we waited for our airborne friend to leave I decided that I could most certainly improve upon my meager answer. A few bars into my new tune, the film crew announced, “Quick, just go ahead and talk before he circles back around.” I’m not sure exactly what I said, but once I hastily stated my name, my website URL, and restated the question in the form of an answer, “What I like most about Moss Mountain Farm is…” I’m pretty sure I only managed to blurt out something along the lines of “…Uh…Farm…Good…” Not exactly the insightful yet witty horticultural repartee I had hoped to provide.

So, to set the record straight, here’s what I REALLY like most about P. Allen Smith’s Moss Mountain Farm.

Moss Mountain Farm is nestled on over 500 scenic acres along the Arkansas River just outside of Little Rock, and is described by its owner as being “designed in the spirit of a classic American farmstead such as George Washington’s Mount Vernon.” The farm is anchored by the Garden Home, which would fit right in as a neighbor to Thomas Jefferson’s Monticello, yet is less than ten years old and built using today’s green technology. 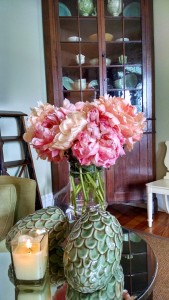 the front door of the Garden Home. It was like entering the pages of a magazine. The attention to every last detail was amazing. Every scene in every room was a perfectly arranged vignette of matching color, carpet, furniture, artwork, flowers, and even books and pens. The subtle scents of citrus, honeysuckle, wild cilantro and lemon grass, along with the delicate glow from decorative candles added yet another sensory layer that perfectly matched the feeling of each room. The scenic views afforded by the windows, along with beautiful fresh cut flowers, seemed to make the adjoining landscape part of each room rather than a separate destination. 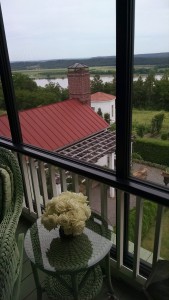 Even the floor had just the right amount of “creak” to it that made you feel as if you were in another time and that perhaps Thomas Jefferson himself might enter the room at any moment.

We then moved outdoors onto a perfectly manicured lawn located between the twin outbuildings of the summer kitchen and the art studio. The lawn looks down onto a beautiful water feature, and like many aspects of the farm, acts as a decorative cover for something much more practical. In this case the large storage tanks for the rainwater harvesting system are buried beneath the lawn.

We made our way along a pathway that meandered through the many “Garden Rooms” of Moss Mountain Farm. Just as inside the Home, each 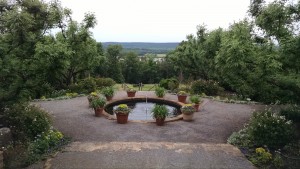 Garden Room had a unique function, along with a theme and design that tied it together, yet blended into the overall fabric of the farm. The variety, color, size, shape, texture, and even inherent movement of each plant fit perfectly into its location. The beauty was only enhanced by the tantalizing view of what lay ahead. Our tour of the working heritage poultry, sheep farming, and trial vegetable gardens of Moss Mountain Farm once again showed that the practical can indeed blend seamlessly with the beautiful.

Several times during our tour I had heard our host describe his use of the design principle of ferme ornée, or ornamental farm. I was intrigued, and upon my return home to Texas decided to learn more.

Ferme Ornée is a gardening design concept attributed to Stephen Switzer and described in his book Ichnographia Rustica: or The Nobleman, Gentleman, and Gardner’s Recreation. Rather than just look up the cliff notes on Wikipedia, I was able to find a scanned 1718 first edition of this book made available by the Biodiversity Heritage Library, download it, and read it for myself. Once I got used to the fact that half of the time the letter “s” looks more like an “f”, I found that after about 5 minutes of labored study, I got into a good early 18th century English language groove, and it made for a fascinating read.

Mr. Switzer summarizes ferme ornée by referring to it as “mixing the useful and profitable Parts of Gardening with the pleasurable.” He details how the following effect vegetation:

– Type of soil (heavy or light, hot or cold)
– Water (“not altogether that designed for Use, but for Beauty”)
– Sun
– Air
– Co-efficient Powers (roots, sap, trunk, and leaves)

He then gives detailed directions for raising trees, woods and coppices and details the use of springs and waterworks, statues, grass and gravel in a landscape plan.

He describes the importance of incorporating the concepts of Grand Manier, or open vista, and Simplex Munditiis, or symmetry and proportion, into a landscape. And just in case you’re starting to think that these principles only apply to a British Estate, or 500 spectacular acres on the Arkansas River, Mr. Switzer gives you a posthumous verbal beat down by stating “for the Room be small, there requires the more Judgement in laying it out well.”

After seeing Moss Mountain Farm first hand, and listening to Allen describe the “why” behind so many of the farm’s details, it’s easy to see that these design principles are used extensively in a marriage of the functional with the beautiful, the outdoors with the indoors, and the techniques of the past with the technology of today. I had seen it stated that it’s a shame that there no longer exist any examples of ferme ornée. I submit that P. Allen Smith’s Moss Mountain Farm is a modern day, living, working example of ferme ornée.

And maybe even more importantly, these same practices and principles can be utilized on your own homestead, whether a large farm, a typical suburban yard, or even an apartment balcony. With today’s enhanced awareness of sustainable green living, growing your own vegetables or raising backyard chickens, there’s no reason not to blend the practical with the beautiful.

In closing, I’d like to leave you with the words of Thomas Whately from his 1770 work Observations on Modern Gardening. They describe Moss Mountain Farm perfectly.

Where Wealth enthron’d in Nature’s pride,
With Taste and Bounty by her side,
And holding Plenty’s horn,
Sends Labour to pursue the toil,
Art to improve the happy soil,
And Beauty to adorn.

Disclaimer: P. Allen Smith and his sponsors paid for my trip to Moss Mountain Farm, as well as my room and board while in Little Rock. The opinions expressed in this article are my own, and influenced by nothing more than the sheer beauty of Moss Mountain Farm. In other words, if I had found the place plain and uninspiring, I would have thanked Allen for having me, and then just written a nice article about brussels sprouts or something.