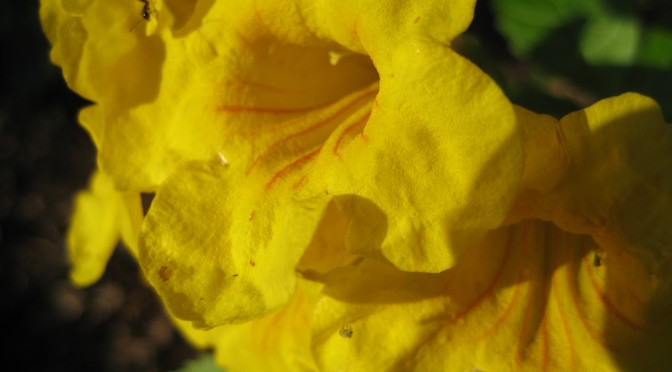 It is native to the Southwest United States, and Florida with a natural range that includes the Caribbean and the Bahamas, and extends into Mexico, Central America, and South America as far as Northern Argentina. Tecoma stans is the official flower of the United States Virgin Islands and the national flower of The Bahamas.

It is an irregularly shaped flowering perennial shrub that grows to 3 – 6’ in height. It has several stems and slender, erect branches with sharp-toothed, lance-shaped, olive-green leaves. From April through November, Tecoma stans produces large clusters of bright yellow, trumpet-shaped flowers that are 3-5” in length. These showy blooms are the source of many of the plant’s common names and attract bees, butterflies, and hummingbirds.

Tecoma stans grows best in well drained rocky, limestone, sand, and loam soils. It thrives in the heat, is extremely drought tolerant, has low water usage requirements, and prefers dry soil conditions. It tolerates cold within its natural range, but even in these southern areas, harsh winters will cause it to die back to the ground. It can be grown in more northern areas but should be treated as an annual, or used as a potted specimen.

The leaves, bark, and roots of Tecoma stans contain many biologically active chemicals, and extracts from those tissues have been used in traditional folk medicine to treat many diseases and conditions (Liogier 1990). Perhaps the most promising compounds are monoterpine alkaloids, which have been shown to effectively reduce the symptoms of diabetes mellitus in rats, dogs, and mice (Aguilar and others 1993, Lozoya- Meckes and Mellado-Campos 1985, Perez and others 1984).

Having become a popular landscape plant in recent years, Tecoma stans contributes to the growing trend of using native plants in both commercial and residential landscapes. It’s beautiful appearance, along with its drought-tolerance, and possible medical uses showcase the best that native plants have to offer.