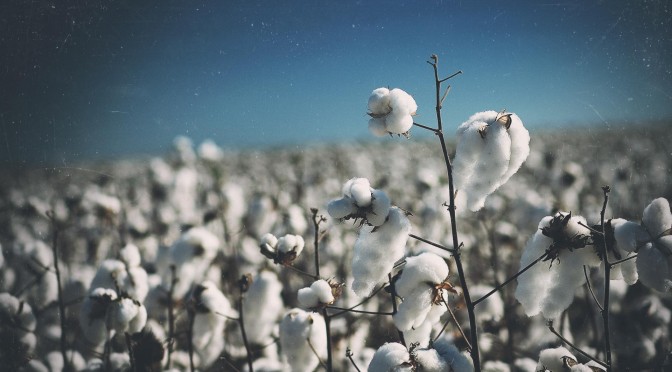 You may soon feel the financial sting as soaring cotton prices work their way from the cotton fields, to the textile mill, to the apparel manufacturer, to the retailer, and finally to that new pair of pants or dress you’ve had your eye on.

According to the National Cotton Council, the international price of raw cotton, as indicated by the Cotlook “A” Index, has increased 145.9% from April of 2010.

Apparel costs for the consumer have held relatively steady from this time last year. The U.S. Bureau of Labor Statistics Consumer Price Index (CPI) report released May 13, 2011, shows the average cost to the consumer of apparel has increased only 0.1% from April 2010.

But the clothes you buy today were made from cotton that was purchased months ago. That lower priced cotton has now worked its way through the manufacturing process. From raw cotton, to thread, to fabric, to finished apparel, to the retailer’s rack, each company along the way must decide how much of the increase in the price they paid for materials used will be passed on and how much they will absorb. Setting an item’s price is a delicate balancing act between pricing it high enough to cover costs and maximize profits, versus pricing it so high as to drive away consumers.

With increasing prices for food and fuel already taking a larger portion of consumer income, the soaring cost of cotton may have caused that balancing act to reach a tipping point where costs cannot be covered without driving away customers. There was an indication of this Friday when comments by several large retailers regarding the rising cost of cotton triggered a mass sell-off in apparel stocks.

GAP Inc. (NYSE:GPS), the largest U.S. apparel-specific retailer by sales, was the largest decliner in the Standard & Poor’s 500 Index Friday when it closed at $19.26 a share, down 17.3%. In their First Quarter Earnings Report for Fiscal Year 2011, released May 19, 2011, GAP stated, “the company expects business performance during fiscal year 2011 to be heavily impacted by pressure from sourcing cost inflation.” They go on to say that the increase in their cost of goods was higher than expected. “The company now expects product costs per unit to be up about 20 percent in the back half of the year, which will more than outweigh retail price increases.”

Cause and Effect
The four major factors that are contributing to the skyrocketing cotton prices are increasing world population, the decline of the U.S. Dollar, rising oil prices, and severe weather in various parts of the world over the past year.

Populations in developing countries are increasing rapidly. These same countries, mostly China, India, and Brazil are experiencing increased urbanization and an expansion of their middle class. This means that there are more people with the discretionary income and the desire to spend it on apparel.

According to Joseph W. Glauber, Chief Economist, USDA in Prospects for the U.S. Farm Economy in 2011, “China is now forecast to be the top market for U.S. agricultural exports in FY 2011 at $20 billion and currently accounts for 40 percent of world cotton imports.” He goes on to say that record high cotton prices should result in increased cotton acreage for 2011, forecast at 13 million acres, an increase of almost 2 million acres. He states that, “Improved returns could lead producers to plant cotton on cropland previously planted to corn, soybeans, sorghum, rice, and other crops.”

A recently released report by The World Bank projects that global wealth and asset holdings will shift toward emerging economies.

This chart shows projected international investment position (IIP), a financial statement setting out the value and composition of that country’s external financial assets and liabilities, over the next 15 years.

The USDA Agricultural Projections for 2011-2020 report states, “The U.S. dollar is assumed to depreciate over the next decade.” Additionally, “The depreciated U.S. dollar since 2002 and its continued decline through the projection period makes U.S. agricultural exports increasingly competitive in international markets.” It also states that, “China and India together account for 37 percent of the world’s population.”

With cotton quickly becoming the new cashmere, now is the time to buy that new pair of pants or dress while you can still afford it.