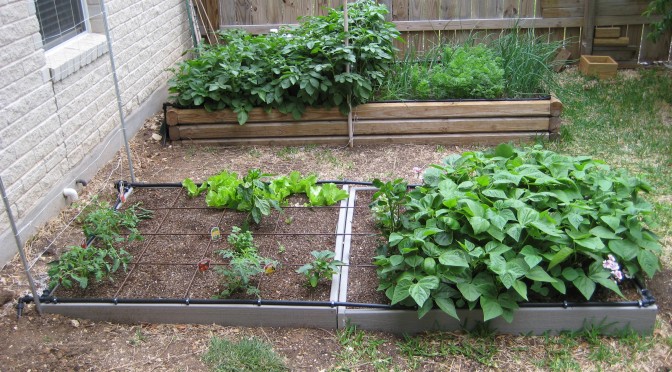 Unless you haven’t eaten in the past several months, or you already grow all of your own produce, you’ve probably noticed that food prices have been rising dramatically. According to the US Bureau of Labor Statistics, Consumer Price Index Data for March 2012, the Consumer Price Index for fresh vegetables purchased for home use rose 4.5 percent from the same time last year. According to the USDA, the average cost to the U.S. consumer of Lettuce is up 8.1%, and Potatoes are up 12.1% from 2010 to 2011. Recent USDA data also shows that the price of grains such as corn, wheat, rice, and soybeans has increased 234% since January 2002.

Let’s take a look at the two major indexes used by the government to measure changes in price over time.

Something to Consider
Here’s something to think about. The retail price (CPI) of fresh table stock potatoes rose 14.2% from March 2010 to March 2011. That’s a large increase. But, the PPI for fresh table stock potatoes rose 65.7% over the same period. That means that while the grocery store paid 65.7% more for potatoes than they did the previous year, they are only charging you 14.2% more.

For whatever reason, the REAL price of those potatoes is not yet being passed on to you. It could be that out of the shear kindness of their hearts the grocery store has decided to take a huge loss on potatoes and many other products. More likely, if the cost you were asked to pay for potatoes suddenly increased 65.7% the next time you went to the store, you’d probably just do without potatoes. Imagine if your entire grocery bill were to increase 65.7% tomorrow. What would you do?

The point being, there are still plenty of price increases already in the “pipeline” just waiting to be gradually added to your grocery bill.

Reasons Why
There are four long-term trends that are contributing to our skyrocketing food prices: Population, The Value of the U.S. Dollar, Oil Prices, and U.S. Biofuels. Severe weather in various parts of the world over the past year also played a role.

Population
Populations in developing countries are increasing rapidly. These same countries, mostly China, India, and Brazil are experiencing increased urbanization and an expansion of their middle class. This means that there are more people, fewer of them growing their own food, and more of them with money to spend on new and diverse foods. China’s soybean imports have risen sharply and now account for more than half of world trade. Year-to-date U.S. potato exports to China alone increased 37% from March 2010 to March 2011.

The Value of the U.S. Dollar
Since there are more dollars being printed, each of these dollars is now worth less and it takes more dollars to buy something. As the value of the dollar decreases, our cost for food goes up. The potato you just bought from the grocery store is still just a potato. It is no different than the potato you bought from that same grocery store last year. An ounce of gold is still an ounce of gold, no different than an ounce of gold purchased last year. As the value of the dollar goes down compared to other currencies, the cost to purchase that same potato goes down for purchases made with another currency. Exports of our beloved potato increase and there are fewer potatoes for domestic consumption.

Oil Prices
We have all noticed the sharp increase in the cost of gas at the pump. These increases raise the production and transportation costs in the agriculture sector. It costs our farmer more to fuel his tractor and more to transport his potatoes from the farm to the grocery store.

U.S. Biofuels
Besides being used for human consumption, corn is the major feed component used in the beef, chicken, pork, and dairy industry. The price of a bushel of corn has increased 56% since 2009. This past year 36% of all corn produced in the U.S. was used for the production of ethanol. That is corn that will not be available for food production. Ethanol has created an artificial market for corn according to economist Bill Lap of Advanced Economic Solutions.

Aren’t Things Getting Better?
Well, if you have small children in the room, you may want to cover their ears or have them leave before reading on. Here are just a few statements from The USDA Agricultural Projections, February 2012. “The U.S. dollar is projected to depreciate through the next decade.” “China and India together account for 37 percent of the world’s population.” “U.S. retail food prices rose faster than the general inflation rate in 2011 and are projected to do so again in 2012.” “The depreciated U.S. dollar since 2002 and its continued decline through the projection period makes U.S. agricultural exports increasingly competitive in international markets.” “World market grain prices are expected to remain well above historical levels for the next decade.” “U.S. ethanol demand for corn and EU biodiesel demand for vegetable oils, holds prices for corn, oilseeds, and many other crops at historically high levels.” “Employment gains are projected to be slow, with high rates of unemployment lasting for a number of years.”

Conclusion
I’m not an economist, a statistician, a financial advisor, or a fortune-teller. This is just how I see things from here in my garden. But as for me, the next time I think about investing in something, it will probably be another potato plant in the garden, or an extra can of corn from the grocery store before the price goes up another 51%. As you can see, having a vegetable garden really is as good as gold.