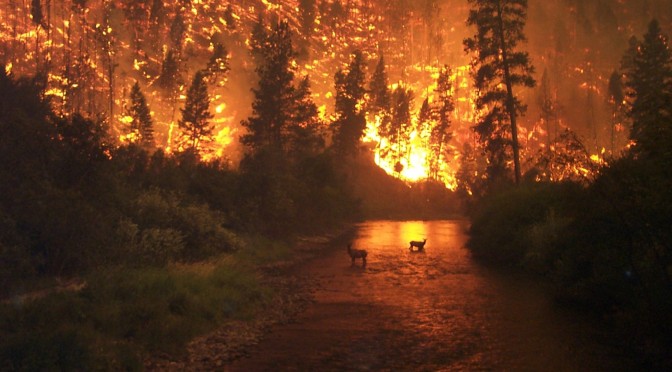 With the severe drought and heat wave that has been blanketing most of the country, and the wildfires ravaging Colorado this summer, now is the time to take steps to prepare for the unexpected. With the rain we’ve had here in Central Texas the past week or two, last summer’s wildfires seem to fade ever farther into the recesses of our memory. But in the words of George Bernard Shaw, “If history repeats itself, and the unexpected always happens, how incapable must Man be of learning from experience.” Remember, last summer in Texas alone, almost 4 million acres were burned due to wildfires. That’s more land area than the states of Rhode Island, Delaware, and Connecticut each contain.

A Change in how Wildfires are Viewed
In the past several years, there has been a major paradigm shift in the way wildfires are perceived. For decades, there was a zero tolerance policy towards wildfires and an emphasis was placed on how to extinguish them once started. The realization now is that fire is a necessary element in nature. Small wildfires that happen occasionally cause less damage and prevent the accumulation of fuel in the forest such as leaves and dead branches. This in turn helps to prevent the mega-wildfires that occur when this fuel has built up over many years and is finally ignited. Firefighters are also taking a more proactive, rather than reactive, approach toward wildfires. Emphasis is being placed on steps that can be taken before a wildfire starts that will minimize the damage it causes.

Where the Forest Meets Your Home
Damage to property is greatest when a wildfire moves from the forest into inhabited areas. This “Wildland Urban Interface” is the new battleground where preventative steps can be taken now that will greatly enhance your home’s ability to survive a wildfire. According to Jack Cohen, Research Physical Scientist, U.S. Forest Service, “You don’t have to live in a concrete block home with stainless steel doors and a metal deck all the way around it. You just have to remember – it’s the little things that count.”

Keep the Fire on the Ground and out of the Tree Canopy
Post-fire assessments of homes damaged by wildfires uncovered two key points. First, wildfires increase exponentially in size and intensity when the fire can spread from the ground up into the tree canopy. It takes less than sixty seconds for the fire front to move through a given point. By keeping the fire close to the ground, a home can more easily survive without igniting as the fire passes through. Second, and perhaps most surprising, was the fact that 75% of the homes burned in wildfires was due to ember accumulation, rather than direct contact with the wildfire. Embers blown by the wind can travel more than a mile from the actual fire. During a large wildfire, one home per second may ignite due to embers. Given that it takes an average of 20 firefighters to contain a single house fire, one can easily see that more fire fighters, and more fire trucks is not a realistic answer to containing wildfires.

The Home Ignition Zone
Proper landscaping and maintenance in the area surrounding your home can serve as a fire break by reducing flammable vegetation and materials, and limiting the ability of a wildfire to move from the grass up into the tree canopy. According to the Texas Forest Service, the “home ignition zone” is the area that extends up to 200 feet out from your home in all directions and can be divided into three sub-zones.

Zone 1
Zone 1 extends 30 feet out from your home and should be well-irrigated, and free from fuels such as dead vegetation, leaves, clutter, debris, and firewood stacks. Keep your lawn mowed, and use low-growing plants that are carefully spaced, have high moisture content and low resin content. Emphasize the use of flowers within this space and limit dense placement of cedars, rosemary, arborvitae, and pines. Trim trees in this area up to at least 6 to 10 feet above the ground and 3 feet back from over your house. Use non-flammable mulch within 5 feet of your house, such as gravel or river rock, and be sure to limit “ladder fuel” plants that will allow a wildfire to go from the ground up into the trees.

Zone 2
Zone 2 extends from 30 to 100 feet from your house. Where possible, limit trees in this zone to clusters of two or three that are also limbed up 6 to 10 feet above the ground. Use low flammability plants here, remove woody debris, and extend your irrigation system to this area.

Zone 3
Zone 3 is the area between 100 and 200 feet out from your home. This area should also be free of woody debris and have the trees thinned so that the canopies are not touching.

The Main Purpose
The overall goal of Firewise Landscaping is to keep the wildfire close to the ground, so that it can quickly move through your property, and limit areas where embers can gather and start spot fires.

Ready, Set, Go
As a homeowner or landowner, we often take comfort in the fact the Fire Department is nearby and that we regularly make our homeowners insurance payments. But ultimately, we must do everything in our power to be prepared for a wildfire. Just remember the phrase “Ready, Set, Go.” Be ready for a wildfire by practicing Firewise Landscaping. Have a set plan in place for when a wildfire approaches. And, when it comes right down to it, go. If you need to evacuate, you can at least take comfort in the fact that you did everything in your power to limit the intensity of, and damage caused by a wildfire to your home and property. The lives of your family are far more important than trying to make a heroic last stand. Be sure that our last quote of the day never applies to you, “History repeats itself, first as tragedy, second as farce.”

One thought on “Firewise Landscaping”